Over the years I bought a lot of LED strips to add almost everywhere … But since I didn’t want to have 44-keys remotes at each corners of my house and that I also want to have them available on power outage, I came up with a different plan to control RGB LED strips with an Arduino.

So, all my LED strips are wired to the same control panel, which has a 20AH battery backup. At the beginning, it was only a relay that was switching them ON when there was a power outage, no way to turn them off on the afternoon neither when I wasn’t at home. Not really useful, right ?

I did some research to control, at least, 7 RGB LED strips with an Arduino or similar. I found few options, like an I2C chip that allows to control few PWM, but then you have to deal with transistors for each channels (so 21 in the best case) and the code to manage all of them at the same time. It was starting to be a bigger project for the time I have. So, what are the other options ? Didn’t find anything really useful on the internet.

Each time I bought a LED strip kit, it came with the strip itself, the remote and the controller. I was just keeping the controllers in a box somewhere, never using them. Then I started to think, why I wouldn’t use the controllers ? I’m not talking about the IR since, well, I want them independent.

So I connected my Logic analyser to the IR receiver and listen some of the tracks. Some reverse engineering and internet and I was able to fit each remote codes to their track.

Few hours later, I was able to reproduce the track on a Arduino. So I started to open each controllers and remove wires to add connectors. This will be easier to connect and to fit into a case. Here is the result of the modified board.

Regarding the code and wiring, I’ll push it into my Github within the next days and show you the final result ! 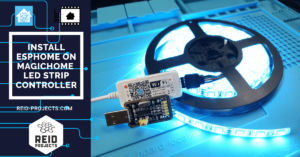 How to install ESPHome on MagicHome LED Controller

How to install ESPHome on Sonoff 4CH Pro R2

How to control RGB LED matrix with an Arduino

How to import GitHub repository into GitLab

Get started with ESPHome Add-On on Home Assistant

How to install ESPHome on MagicHome LED Controller

How to install ESPHome on Sonoff 4CH Pro R2

How to install ESPHome on a Sonoff Basic

How to use distance sensor HC-SR04 with the Arduino

How to control RGB LED matrix with an Arduino